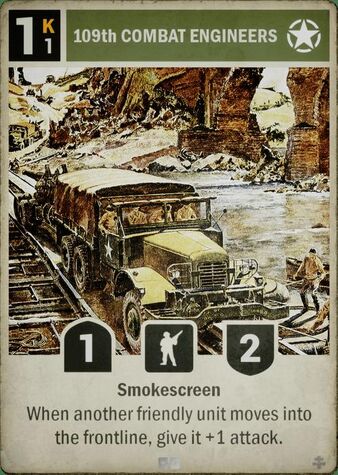 109th Combat Engineers is a Infantry in Kards - The WWII CCG.

The 109th Combat Engineers Battalion was part of the 34th Infantry Division of the US Army during WWII. The 34th was the first American division to be deployed in Europe in 1943 where it fought in the Italian Campaign. Prior to that the division had participated in Operation Torch in 1942 (Allied invasion of French North Africa) and the Tunisian Campaign that same year. During WWII the division saw 517 days of front line combat, second to the 32nd Infantry Division with 617 days of front line combat.

When another friendly unit moves into the frontline, give it +1 attack.

The 109th Combat Engineers are a staple card of aggressive decks which use the US as the main or ally nation. They provide a fairly respectable unit for 1 Kredit, with 1/2 stats and Smokescreen. The Smokescreen in particular helps them to survive and keep utilising their ability: "When another friendly unit moves into the frontline, give it +1 attack". This is really where the 109th starts to cause some problems for the opponent, particularly in US and Germany lists (which are very popular as of me writing this- 17/11/2021). Namely, dropping this unit turn 1 and a Panzer 35(t) turn 2 means, assuming the enemy is not also playing an aggro deck or countermeasures, you will have a 3/2 tank in the frontline and ready to attack the HQ. Of course they provide far more value than just a bigger Panzer 35(t), with almost every unit in the game benefitting from a +1 attack buff (but, in US aggro, 1st Marines, 32nd Infantry Regiment and your German tanks becoming extremely dangerous). It is easy to rapidly build a powerful frontline full of threatening units, thanks in no small part to this little infantry. 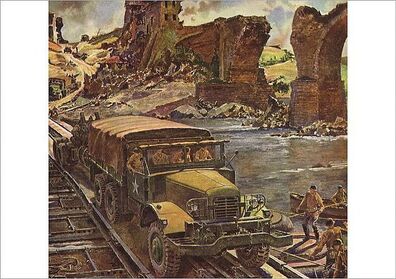